The Bachelor makes me extremely uncomfortable, but it’s one of the most compelling shows on television. When the Australian version of the franchise started, I’d go to work at 6:30 on Thursday morning and my boss would ask me if I’d watched it the previous night. I was curious how he managed to have time to watch it, because my alarm went off at 5:30 and he was there hours before me. I always said no, and he still asked me every week. Wednesday night was the first time I watched a full episode of The Bachelor, and there’s nothing quite like watching a television show with the company of Twitter. There are PhDs to be written on the psychology of watching The Bachelor, but that’s not my field. Like most reality competition shows, The Bachelor is incredibly political. It’s a game, and the way people play it is fascinating. There are plenty of hilarious Bachelor recaps on the internet, so these posts are going to be about the politics of it all. Who is playing the game? Who doesn’t understand that strategy is important in a competition like this? Let’s have a look. 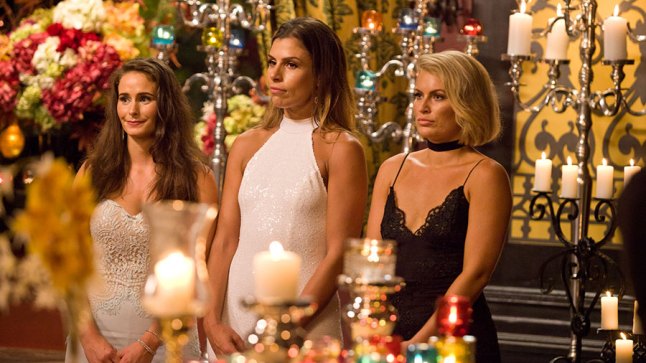 Keira’s made an impression on Twitter, but she really needs a strategy. Image courtesy of Network Ten.

I was going to break this down by contestant, but first a quick rundown of the events: Ritchie meets the girs, then they have the first cocktail party. Osher arrives at the mansion to announce that the white rose is in play (pity it’s not a black rose to symbolise the love between Brynden Tully and Olenna Tyrell #Blackthorn). The white rose has meant different things over the years. This year, the white rose is going to whoever makes the best first impression on Ritchie, and they can use it to spend one on one time with him during a cocktail party. Alex wins the white rose, to the disappointment of everyone else. Throughout all of this, we’ve met Keira, who is this year’s villain. She says that she’s the whole package and spends most of her time judging the other women. She’s the last person to get a rose at the first cocktail party, and she’s livid.

In episode 2, Ritchie goes on a single date with Nikki, who was the first person he met. They fly on a helicopter to a private beach, and Nikki is forever ruined for first dates if she doesn’t win this competition. She met her ex-partner when she was 15 and they were engaged, so she’s never been on a date. It went pretty well, Nikki got the rose. The next day there was a group date with Keira, Eliza, Sasha and Alex… and six other women. They did a 50’s themed photo-shoot. Then there was a surprise single date for Olena, who also got a rose before the cocktail party. The women who go on single dates, so they don’t need to worry about finding time to spend with Ritchie at the cocktail party. Let’s talk strategy, shall we?

Keira: As we know, Keira is the villain this season. Unfortunately, she doesn’t really seem to have a strategy. She looked good in that dress and she had chemistry with Ritchie (he accidentally asked what turns her on), but that doesn’t get you the prize. You have to play the game. When she gets some time with Ritchie at the cocktail party, she tells him that the white rose turns her on. Big mistake Keira, you’re showing your hand too early. She’s confident that she’s won it, and is shocked that she didn’t get it. Or the first single date. She was in fact the last woman to get a rose at the cocktail party. When she’s invited on a group date, she’s sour because she has to share Ritchie. This is the first of many times she says “I don’t like it.” I’ll say this for Keira, she speaks her mind. The group date is a photo shoot for Women’s Day, and there are four separate groups. Keira is drinking a milkshake with Ritchie, and Sasha is their waitress.

Sasha: Sasha is my hero. One of the big moments of the first episode was the shot of her eating her rose. Yes, Homer Simpson did it first, but we seem to forget that plants have functions beyond looking pretty. We want our television characters to be more than one thing, and Sasha is showing us that roses are more than just ornamental. Rosewater is an ingredient in dessert, and prople have freeze dried rose petals on their wedding cakes. If Sasha was hungry, good on her. I hope she’s an expert on edible weeds. All of that aside, Sasha comes to play on the group date. Keira took it for granted that it would be just her and Ritchie, but Sasha is also a contestant on this show. You may want one-on-one time Keira, but you don’t get it just because you think you should have it. Sasha’s there too, and she’s your competitor, she’s going to try and throw you off. She was very funny, and I enjoyed it a lot.

Alex: At this early stage of the competition, Alex is looking like a favourite. She won the white rose (which apparently belongs to Keira) on the first night for making the best first impression, but let’s jump back in time to why she got it. The most substantive thing Ritchie and the audience learned about any of the women during that first cocktail is from this exchange:

Ritchie: Tell me something deep about yourself.

Alex is 24 and she has a 5 year old son named Elijah. She was nervous about telling him, and it showed. You don’t get the white rose because you think you deserve it, you get it for making an impression. The closest thing we got to Alex’s confession at that cocktail party was Megan (who I think is going to win this thing) comparing falling in love to free diving. All of these women are beautiful; you have to be brave to win the white rose, and Alex was the only contestant who showed any kind of vulnerability in front of Ritchie that night.

The cynical view of the situation is that Ritchie did it to look like a good guy, but his actions at the group date indicate that he’s genuinely interested in Alex. Alex is the only contestant at the photo shoot not in a group, she’s sitting in a cadillac with Ritchie. There’s chemistry, and Keira is loud to try and distract them. That is pretty much the extent of Keira’s strategy: being loud. We know literally nothing about her. Getting noticed is good, but she hasn’t really done anything else. What turns her on? The white rose. She is so desperate to get that one on one time with Ritchie, but why? What about him does she find attractive? Alex got the white rose because she was vulnerable, and Nikki and Olena got roses on their single dates because they were serious about getting to know Ritchie. Speaking of Olena, I’m impressed that she was so upfront about learning if Ritchie is the person she wants to be with. There’s a lot of posturing on this show, but the people who are doing well are being honest, and there’s strategy there as well.

So we make it to the second cocktail party, and the first thing Ritchie does after he arrives with Olena is talk to Nikki. The other contestants are a little miffed because Nikki has been on a single date with Ritchie, and she has a rose. Maybe Nikki’s a bit worried because she had a great date and the guy she likes just rode off into the distance on a motorbike with a beautiful woman. This show really is bizarre – you get to be polygamous for a few weeks/months, but monogamy is the ultimate prize.

Meanwhile, Alex has gone back into the mansion to get the white rose. It’s a cocktail party, so the white rose is in play. Keira is not happy. That was her time with Ritchie. The way this episode was promoted, it seemed like Keira and Ritchie were talking and Alex sauntered up to interrupt them with her white rose. She didn’t cut in front of anyone, she waited until he was free. Everyone else says “Of course she’s using the white rose, that’s what it’s for.” Once again, roses are more than just ornamental. Alex uses her time to get to know Ritchie. They both grew up in the country, and they bond over football until Alex reveals she’s a Collingwood supporter. I guess it’s better to know these things early. Ritchie is a gentleman though, and he doesn’t have a problem with a bit of friendly rivalry. Elijah goes for Essendon, and Ritchie’s okay with that. What Alex really wants to know is that she’s more than just a mum. Like roses, people can be more than one thing, and women are more than just mothers. She grew up on a farm and rode dirt bikes and she goes for the most hated team in the AFL. She was all of those things before she had Elijah. Ritchie is very reassuring and lets Alex know that he’s here to fall in love. This is something he didn’t expect, but if she’s who he falls in love with, she’s going to win.

When Alex gets back to the rest of the girls, everyone other than Keira asked how it went. Keira really “didn’t care” that Alex used the white rose, but she had a lot to say for someone who has absolutely no opinion. It’s the first fight of the season and people are ready to get out of there. Keira says she wouldn’t have used the rose in that situation, but what’s the point of having the rose if you don’t use it? This is a competition Keira, and other people are playing the game. That’s what you have to do if you want to win. It takes more than chanting “Bed! Bed! Bed!” when someone else wins the white rose to get somewhere in this competition. If you want to make an impression, at least make a good one.