It’s nearly the end of June, so it must be time for the May wrap up! Without further ado, let’s see if I can remember anything about what I read in May. It’s probably been a month since I started writing this post, I’ve been in lockdown again for the past three weeks. I read a whole book today!

Book of the Month: Eggshell Skull by Bri Lee 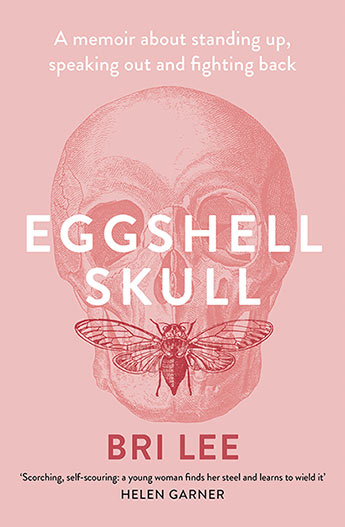 I took a writing workshop with Bri Lee in 2017, several months before this book was published. I bought it the week it was released in 2018 and only got around to reading it this year. I knew that this was a book about Bri’s experience as a clerk for a judge in Queensland’s District Court and that it was related to sexual assault/harrassment, but that’s it. I was captivated the entire time and I’m pretty sure I finished reading it at 2am. During Bri’s year as a clerk in the District Court, she travelled around the state with her assigned judge, who presided over several sexual assault cases. Bri captures her disgust that alleged perpertrators aren’t being convicted, and it brought back memories of being assaulted as a child, by someone she trusted at the time. What follows is an account of her bringing charges to her assaulter, with the knowledge from experience that it was unlikely to work in her favour. Read it.

The Legend of Korra: Turf Wars and Ruins of the Empire by Michael Dante DiMartino, Brian Konietzko Irene Koh and Michelle Wong

I finished watching The Legend of Korra at the end of April and the first thing I did was look up the comic book continuation. One thing that the Avatar world has established is that actions have consequences (e.g. Aang created Republic City on Earth Kingdom land, which informed the Book Four plot of the show) and we see this continue into the comics.

In Turf Wars, Korra and Asami go on their vacation to the Spirit World and begin their relationship, which is lovely. Meanwhile, everyone else is dealing with the spirit portal that Korra and Kuvira opened up in the Book Four finale. There’s a political story that I love, too. The only thing I had an issue with is Bolin becoming a cop, because I don’t want that for my sweet boy. Thankfully he retired at the end of the story.

Ruins of The Empire is exactly the kind of thing I love. What happened to the Earth Army after Kuvira surrendered to Republic City? Well, not everyone was on board with that plan. We even got to see the “re education camps” that we were only mentioned in the show. While they weren’t precisely the horror I was expecting, there was mind control involved so that the Earth Army could control the free elections. This story also has flashbacks to Kuvira’s upbringing and her time living with the Beifongs, and I liked that Korra needed to work with her. This world is at its best when former enemies work together (the Book 4 episode when Korra visits Zaheer is one of my favourite scenes in the whole show).

Romancing Mister Bridgerton and To Sir Phillip, With Love by Julia Quinn

I’m slowly continuing my read of the Bridgerton series, which varies in quality. However, Romancing Mister Bridgerton is my favourite of the series so far (unsurprising, given that friends had told me the same). One of the great things about the Bridgerton series on Netflix is that it’s given us some insight into the non-Daphne and Simon characters, including Penelope, who I adore. Colin isn’t the brightest, but what’s important is that Penelope loves him. And after quite some time abroad, he falls in love with her and it’s wonderful. Penelope also isn’t revealed to be Lady Whistledown until partway through this book, which drives the narrative forward, as Lady Danbury offers a reward to whomever unmasks Lady Whistledown and Colin’s certainty that it’s Eloise (that is, until he discovers it’s Penelope).

I was also interested in Eloise’s story, because she’s such a firecracker in the show, although due to what I said about the show, she’s less prominent in the books. I liked her story, but not as much as Colin and Penelope’s. Sir Phillip is a man who has so many many issues and is afraid to spend time with his children because he doesn’t want to be like his own father. Eloise wrote to him when his first wife, a distant Bridgerton cousin, died and they started a correspondence. Then, when Penelope married Colin, she wanted something for herself and ran away.

The Dawn Chorus by Samantha Shannon

I can’t remember exactly what prompted me to read this novella. Maybe I was scrolling through Samantha Shannon’s instagram and wanted more Bone Season, then realised I hadn’t read this yet. Either way, it was a nice bridge between the book that just came out and the one previous, as well as spending more time with Paige and Warden during their time in Shaol. There were a few things that stood out, such as a certain character who reappeared in the fourth book. I wonder if I would’ve picked up on it had I read it earlier. We’ll never know.

Before I get into this book, some background. My parents came up to visit in early May and my dad was reading it. Then my parents said I could read it, as long as I brought it back with me when I visited for the June long weekend because mum wanted it to be her book club book. That didn’t happen because Melbourne had a snap lockdown and now I’m in lockdown and they’re actually in another snap lockdown that started today – I offered to send it down, but she said that would’ve been too expensive. Also my grandma wants to read it – she lives in a retirement village. The Thursday Murder Club is about a group of septuagenarians who live in an upscale retirement village. They meet on Thursdays to discuss and solve cold cases – not for glory, but for fun. Then the business partner of the village’s owner is murdered and they have a live murder on their hands. They also make friends (and sometimes get in the way of) the local police. It’s a lovely story about friendship, solving mysteries and most importantly, the evils of capitalism. The second in the series is coming out later this year and I may not buy it straight away, but I’m sure I’ll enjoy it.