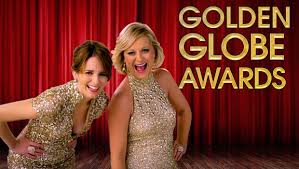 I’m going to miss these guys. Image courtesy of HFPA.

The Golden Globes is the first big awards ceremony to kick off the awards season when it comes to film. The problem here is that approximately 1% of the films that have been nominated have been released in Australia. Last year I used a randomiser to predict the film winners, but this year I’m going to leave my film predictions for the Oscars. There are still distribution issues with television in Australia, but it’s slowly getting better, and I think I’ve seen most of the nominated shows that I actually want to watch. It’s been a good year in television, and I like the complete unpredictability of the Hollywood Foreign Press, so every prediction I make will be worth a grain of salt.

Should win: I have seen three of the five, although I am behind on Empire. Of those three shows I have no preference, so I’m going to say Empire.

Will win: I had no idea people liked Narcos so much, but given the Mr. Robot buzz last year, that’s my pick.

Should win: I have seen some of each of all of these shows except for Casual, and also I’ve only seen the first two episodes of Veep. I really like Mozart in the Jungle, so I’m going to pick that because there’s nothing else like it right now.

Best Limited Series or Motion Picture made for Television

Should win: In this category, I’ve seen all of Fargo and Flesh and Bone, and the first half of Wolf Hall, which is going to be my pick.

Will win: Flesh and Bone, because HFPA is weird like that.

Best Actor in a Television Series, Musical or Comedy

Should win: I haven’t seen The Grinder or Blunt Talk. I love Gael Garcia Bernal, and Tambor’s performance is great, but I really want Aziz Ansari to win this, because Master of None completely won me over, and I was never a fan of his character on Parks and Recreation.

Will win: Tambor basically has all the awards locked up.

Should win: This is the first category in which I’ve seen every nominee. I’m going to go with Taraji P. Henson, mainly because I watched a Person of Interest marathon on New Year’s Eve, and she does fantastic work in that show as the complete opposite character to Cookie in Empire, and she’s the biggest appeal of that show.

Will win: I’m going to go with Henson, although HFPA is unpredictable, so my backup is Eva Green.

Should win: Here I’ve seen Hamm and Odenkirk, and I’m going for Hamm.

Will win: Jon Hamm. I really have no idea.

Best Actress in a Television Series, Musical or Comedy

Should win: People like Crazy Ex-Girlfriend, but I haven’t seen it, and Gina Rodriguez is still giving one of my favourite performances on television. She should win for that Britney dance sequence alone.

Will win: Rachel Bloom. I quite like the HFPA’s tradition of recognising emerging actresses, and I’ll be happy if the CW gets another award for this strange reasoning.

Should win: All great actors, this is a tough category. Patrick Wilson because I loved his performance, even though I also loved Isaac and Rylance.

Will win: Oscar Isaac, not only because he deserves it, but also because he was in Star Wars.

Best Supporting Actor in a Television Drama, Comedy, Limited Series, or Made for TV Movie

Should win: What a bizarre collection of actors – maybe they should split up the supporting characters. Of the performances I’ve seen, my favourite is Tobias Menzies, who has shown himself to be such a versatile actor in Game of Thrones, Outlander, Catastrophe and The Honourable Woman.

Will win: Christian Slater. I really have no idea.

Best Supporting Actress in a Television Drama, Comedy, Limited Series, or Made for TV Movie

Should win: Okay, this is interesting, we’ve got nominees across all ‘genres’ here. The person who should win is Noël Wells, but for some reason she wasn’t nominated, so I’m going for Uzo Aduba, which was probably the win I was most excited about at the Emmys last year.

Will win: I am completely stumped on this one, so I’ll say Maura Tierney simply because she was always my favourite on ER.